Wake up in the early morning and enjoy the leisurely rhythm of Nha Trang City, you will truly feel what it means to unburden all your worries. With a notebook, a pen, and a modern cappuccino, sitting inside the coffee shops beside the Nha Trang Beach, do you wonder how different this place is from the many other coastal cities you’ve passed by? Start with the festivals of Nha Trang and maybe you’ll discover the answer.

GRATITUDE TOWARD THE MOTHER

Po Nagar Tower worships Mother Po Ino Nogar, who is said to have taught the Cham people how to grow rice and other agricultural products. You can choose whether or not to believe in the myth that surrounds her, of a lady happening upon rice. Yet, the custom proves such a beautiful local culture of “when you eat fruit, think of the… woman who planted the tree”.

Tracing back to the eighth century, Po Nagar Tower, together with My Son Sanctuary, were the two most sacred realms of the Cham Kingdom. Nowadays, there are not many Cham people living in Nha Trang (most of them moved to Ninh Thuan Province in the 18th century). Yet, after historic changes, after competitions and compensations, Po Nagar Tower today has become a crucial spiritual part of the Cham-Viet community.

Every year, from the 20th to the 23rd of Lunar March, people will celebrate Po Nagar Tower Festival or Thap Ba Festival. This is one of the most quintessential festivals of the middle southern regions of Vietnam when many of the Cham make their pilgrimage back to this sacred tower.

A ceremony and many traditional performances take place all within the area of Po Nagar Tower, on a small hill next to Cai River, three kilometers to the north of Nha Trang city center. The historic tower was first built in the eighth century. Its construction is still quite a mystery, how did people 1,000 years ago hold together the bricks without using cement? This enigma only adds to the design, the architecture itself is enough to amaze you with its decorative sculptures.

The architectural site can be separated into three parts. The lowest part is the gate tower, which no longer exists today. From there, stone staircases lead you to the middle part (20 meters x 15 meters) filled with ten big brick columns, five at each side, and other small columns. This is called Mandapa, where pilgrims take a rest and prepare themselves before visiting the sacred shrines. The towers mark the highest section, with the biggest 23-meter high Po Nagar Tower located at the center. Inside this historic tower, you will find the statue of Mother Po Ino Nagar, 2.6 meters high, sitting calmly on a lotus sculpture. Her face (which was recreated recently) expresses the gentleness and compassion that tell much of what people believe in the beauty of a great mother.

THE FATHER FROM THE SEA

Anchored in the sea, the people of Khanh Hoa Province, including Nha Trang City, honor the whale – a symbol of their lifestyle and rescuer. A common belief prevails to this day among the fishermen from Quang Binh Province to Ca Mau Province: when a whale appears, the waters near the whale will likely reward fishermen with lots of fish. There have also been tales of whales rescuing Vietnamese fishing boats from danger, which encourages the belief that the whale is a sacred creature. There is, again, no evidence, but the light of truth is enough to prove this faith. The local fishermen surely believe and show their great gratitude towards the sea. This, in addition, amazingly matches the international motto of protecting the whales from the edge of extinction.

Traditionally, if villagers happened to find a whale’s dead body near the beach, they were responsible to entomb it properly, with its bones worshiped in a suitable temple. In Nha Trang, the festival takes place in the Lunar February or Lunar March (each whale cemetery has its different date). There are activities and traditional performances during the days of the festival, most significant is the Ho Ba Trao performance.

“Thousands of days remembering the mercy of the ocean

Every day making our own efforts

Despite fearsome storms, we are not afraid”

(Translated from a piece of Ho Ba Trao lyrics)

Ho Ba Trao is a type of stage art, where people play musical drama expressing their gratitude to the whale and pray for the full life of the community. Whale Festival, with Ho Ba Trao being a cornerstone, has been recognized as the national cultural heritage. If you book your stay in the center of Nha Trang City, you can walk to Ong Cemetery. There, partake in this meaningful festival and maybe you’ll understand why the whale is such a mythical creature.

When: Lunar February – Lunar Match (depends on the year)

A TREASURE FROM NATURE

I got choked on a bit on writing this part. People refer to Salanganes Nests as one of the most precious foods from nature. However, we barely know how suffering most of us cause for the salanganes when we collect their nests. To describe a few: these creatures marry only once in their life. The male and female salanganes then will create the nest from their own saliva, feathers, and a few dried leaves. And that is where they spend their whole time raising their children. An inexperienced nest collector may take the whole nest, or a big part of the nest, leaving these salanganes homeless.

The bird couple then needs to rebuild the nest, it is when the saliva gets exhausted and their blood gets into the building process. The worst case is when the female bird is about to give birth, yet going home realizing her nest was taken away, she could die. The male salangane either lives his life alone or die with his spouse. Imagine hundreds of salaganes die every year this way… It is really sad! Only with a thoughtful growing and collecting method could people sustain this job in a humane way.

Nha Trang is said to be the home of the most famous Vietnamese Salanganes Nests. Although only a few years old, Salanganes Nests Festival is widely known as an interesting spotlight of this city. If you visit Noi Islet, Nha Trang on Lunar May 10th, you will likely find yourself among the dynamic crowd celebrating this event. On this islet in 1328, people led by Sir Le Van Dat first found the precious salanganes nests and started exploiting its use. The descendant of Sir Le Van Dat, General Le Thi Huyen Tram, continued to develop the industry. On Lunar May 10th, 1793, Madam Huyen Tram sacrificed herself during battle to protect the islet from invaders. Since then, the date has been celebrated to recognize her mercy.

Today, the festival is not only a death anniversary but also an opportunity for locals to express their thanks to their predecessors. On the stone plate inside the temple, you can find the names of the generations’ leaders that significantly contributed to building the salanganes nest industry and its surrounding area. If you ever wonder about the quality of their salanganes nests, check out Khanh Hoa Salanganes Nest Company’s awards. And that’s not everything. The most beautiful part is you can interact with a local community making a sustainable living with nature.

When: Lunar May 10th

A HIGHLIGHT OF THE LOCAL CULTURAL DEVELOPMENT

There are lots of interesting cultural spotlights in Nha Trang that may not come to light if you’re just spending a few days in the city. Cham pottery and Cham weaving businesses, for example, have long faded away since the Cham moved to Ninh Thuan Province. Hence, if you want to fully understand Nha Trang in its past beauty and its transformation to its current face, arrange your trip somewhere between June and July. This is when Nha Trang Sea Festival will occur.

Once every two years (since 2003), Nha Trang Sea Festival is celebrated, highlighting the authentic cultural spotlights of Nha Trang. While the general concepts vary from year to year, you can get a good sense of Nha Trang ancient cultural by attending these occasions. This festival usually lasts for four days, with a large range of activities and performances that will surely give you a genuine taste of the local people. The main venues include 2-4 Square, the seafront parks, and main tourist attractions (Po Nagar Tower, Noi Islet, Dong Tam Island, etc.). Adding to the color of Nha Trang Sea Festival, there will be on-stage performances by guest artists from other countries.

Last year, the festival concept was “Welcoming friends with open arms”, and before that, in 2015, it was “Peace and Creation”. The theme always promotes a happy and long-lasting connection to society.

When: June or July (depends on the year) 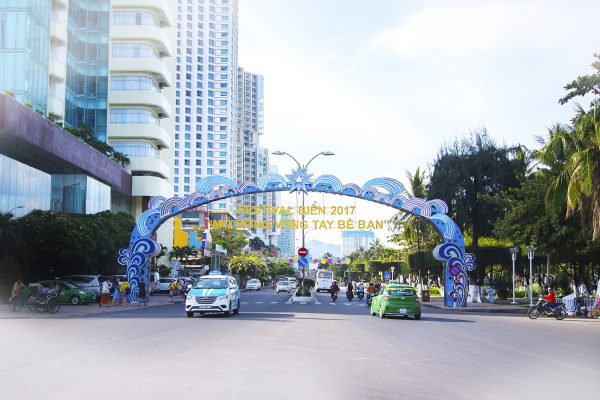 You might have already filled your Nha Trang travel-list with its great things to see and do, its charming islands, and lots of amazing outdoor activities it supports. Yet, don’t forget to spend a couple of minutes walking through its several markets, visiting its adorable Long Thanh Photo Exhibit, and don’t forget to attend its festivals if your trip luckily falls during these days. If you are still not so sure of where to stay in the city, let’s check out our social accommodation with some of the most adorable and thoughtful hosts you could ever think of right here.