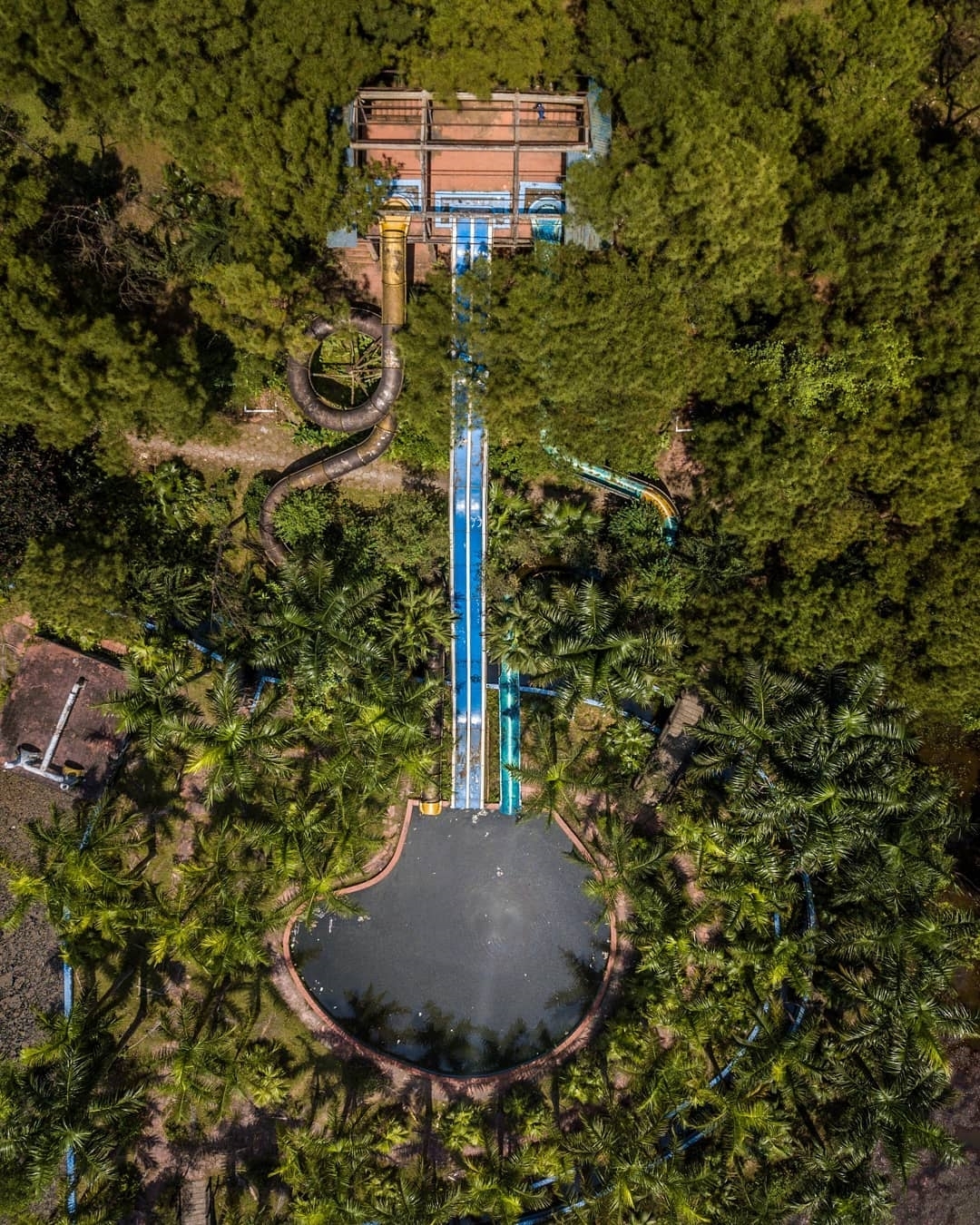 Other than the worldwide reputation from its monument complex and many other magnificent landmarks of Vietnam dynasties, Hue once again has captured our attention for being home to Thuy Tien Lake or Ho Thuy Tien – a large and abandoned waterpark. This former waterpark now still retains its very purpose, which is to entertain people but in a very different vibe: extremely creepy yet curiosity-triggering. Today, let’s discover this unique amusement park altogether from scratch – starting with its history.

What It Was and When It All Started

It’s been about 18 years since Thuy Tien Lake waterpark officially opened and welcomed its very first guests. However, it only received lots of national media coverage and people’s attention after a popular American news website posted an article about it two years ago. Dating back to the beginning of 2001, Thuy Tien waterpark was announced to start construction with a total capital of more than 70 billion Vietnamese dong. This project was funded by a state-owned enterprise to promote Hue’s tourism and attract more tourists to the province in general.

According to the initial development plan, Ho Thuy Tien waterpark would have a great variety of entertainment sectors besides water-themed games, including a thrilling games area, aquarium palace, wild animals exhibitions, gardens with fairy simulations, a cultural village, and food courts around the park. It really was a promising amusement waterpark with such potentially attractive and engaging activities. But things didn’t go as planned.

How Things Went and Why It Was Abandoned

Around three years later, Ho Thuy Tien waterpark first opened its doors for entry in June 2004. Even though this was an official grand opening, the park was not completely finished at the time. Many buildings were not completed, creating a very inefficient utility of the park. After some time operating without any positive turnover, the project had no other choice but to shut down and it was left to the provincial authorities to settle.

Under the pressure of collecting investment loans from banks, Hue authorities sold the project to another company called HACO Hue and originally based in Hanoi. At this point, Ho Thuy Tien waterpark was under management of a new investor, bringing new hopes to save this huge work.

However, this only worsened the situation. Although HACO Hue did make some efforts after receiving the project, it was never enough. Ho Thuy Tien’s second investor planned to reconstruct it into an ecotourism compound with a convention center, restaurants, spas, traveling accommodations, arts, and outdoor events. These great ideas received little care and preparation and the property gradually deteriorated. The number of guests grew smaller day by day, the unfinished areas were still in progress and others were left abandoned. The park’s overall facilities degraded badly after receiving no further building and proper investment.

Finally in 2017, Hue People’s Committee decided to acquire the project and turn the management rights to another local authority after all the years of inefficient operation. On top of that, HACO Hue was also reported to have violated Vietnamese laws of land for delayed execution of the project as an investor. This officially put an end to Ho Thuy Tien’s construction from this investor. Till this day it will be ever recovered by any company, Ho Thuy Tien waterpark was never finished.

Left abandoned for more than ten years, Ho Thuy Tien waterpark right now is a complete ruin nearly 50 hectares in area. Many game zones that were once guarded by staff now have a scarily isolated view because no employees whatsoever have worked here for a long time. The entrance paths have all been covered by grass, adding to the dreary scene. Big yards in front of many entertainment areas now are vast grass hills and also a fertile feast for cattle raised by residents in the neighborhood. Many large villas originally built to serve guests with comfortable stays are completely abandoned, some were not even finished. It feels as if you walked straight into a horror movie.

Picture a terrifying dragon head, sunning himself in the middle of a green lake. This is the scene of the main attraction. Expect broken aquariums, the glass on the ground calling to another time. There are hallways of plaster sea animals, an entire staircase that looks like the inside of a large lizard, and you can even look out across the park from the mouth of the dragon. You can have this place to yourself, find a room to explore, and hear your echo fill the belly of the beast.

Anything made of steel such as the gates that separate areas, frames of the gaming structures, and tons of other facilities are badly rusted and falling apart. Inside the aquarium or other indoor structures, the ceilings are peeling and hanging down like ghosts. Many dusted electricity boxes are heavily damaged, making it very dangerous if anyone wants to enter. The alligators that used to live in the aquarium are said to be still alive, the scrawl of teenagers say so on the walls. However, until now, nobody knows for sure if it’s true or not because the scenes are too frightening to see and confirm. If you make your way to the water slides, it only shows an equally uninspiring view: all the slides are covered with moss, the pool nearby is filled with lots of garbage, and the water is highly polluted.

Another extraordinarily terrifying view is from the area around Thuy Tien Lake. There used to be many beautiful sculptures in various shapes scattered around the lake. As time passed without any kind of preservation, these works of art have turned into massive deformed objects. Exposure to the rays of sunshine and rain for a long time also wore them out in a very harsh way, leaving the figures a gloomy grey color. Lots of graffiti and nonsense texts have painted these vestiges. Considering the current situation of this abandoned waterpark, I’m not sure if the graffiti should be identified as vandalism or warning signs to the people still coming here.

A billion tourism projects now have become no more than a massive horror display. Secluded, terrifying and spine-chilling, this is a testament to the abandoned.

Situated not too far from Khai Dinh Temple, Ho Thuy Tien waterpark is in Thuy Bang commune, Huong Thuy town, Hue province. Getting here is rather easy: you can write down the name of the park in Vietnamese and give it to the driver if you travel by taxi, which is: Cong vien nuoc ho Thuy Tien. Or for motorbikers, the location of Thuy Tien Lake can be found on Google Maps, so follow the route on the map and it will lead you to this waterpark.

According to locals, local authorities officially banned people from entering Ho Thuy Tien waterpark. However, young adventurers and thrill-seekers still manage to get inside this creepy waterpark and go for a tour around the lake. From the words of the experienced, even though entry to Ho Thuy Tien is prohibited and the properties are abandoned, you are expected to pay the security guard from 20,000 VND to 50,000 VND if you want to visit inside.

Ho Thuy Tien waterpark has such a sad history. It’s the joy that could have been that makes this place so melancholy, the laughter of children during a family picnic would fill the place, or the joy of friends when trying a sliding game together would light up the park. Now it’s just a completely isolated and scary skeleton, waiting for people to come every now and then. However, the good news is this special waterpark makes a very extraordinary photogenic spot! Other than discovering a creepy yet fascinating place, you can take some extremely stunning photos. Keep reading our other articles about Hue to see what else you can explore in the city:

From Hue to Khe Sanh – A Ride Through History

When is the Best Time to Visit Hue, Vietnam?

The Sacred Pagodas of Hue: A Spiritual Tour