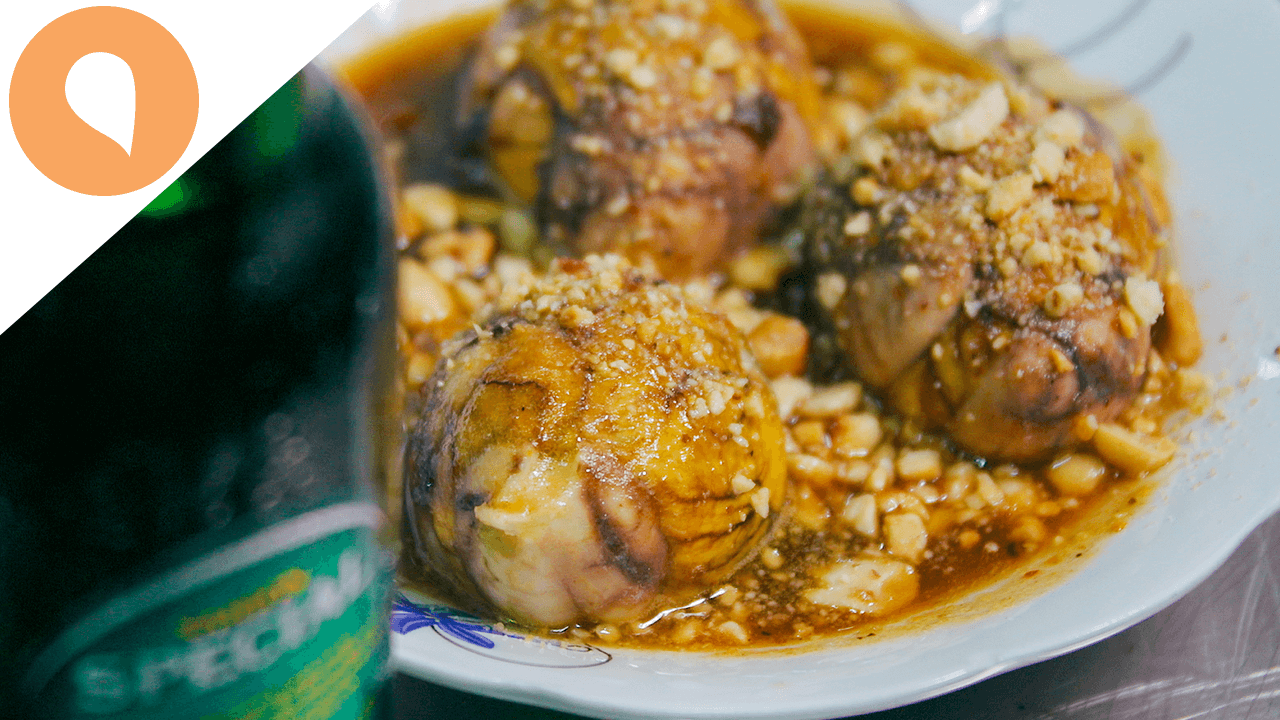 Not only do Western countries have bizarre foods which surprise tourists but most Asian nations do too. A lot of the stranger foods originate from tropical areas, and Vietnam is no exception. Today, let’s discover one of the top ten weirdest (but yummy) foods from around the world right here in Ho Chi Minh City: trung vit lon (balut) also known as fully-formed duck egg, and even more.

Different from the Filipino Version

Trung vit lon a.k.a. fully-formed duck egg (FFDE) is a nutritious and popular food in Vietnam even though it looks a little bit scary to Western and international tourists. You can find a similar dish in the Philippines called balut.

Many people think balut in the Philippines and FFDE in Vietnam are the same, but they’re actually quite different. Filipino balut is incubated for up to 16 days so you can find balut at any development stage, while FFDE in Vietnam is incubated until a baby duck is formed which takes 19 to 21 days. Another difference is that Vietnamese people usually enjoy eating this unique dish with a kind of herb called laksa leaves.

The reason why people around the world find this food creepy is that the egg contains a duck fetus and you can see its beak, feet, and feathers very clearly after breaking the shell. Sounds a bit frightening, doesn’t it?

But don’t worry, it’s completely legal in Vietnam, and you definitely won’t be convicted for eating a duck egg with a baby duck inside. And believe me, the taste does not compare to the look.

There are two ways to eat trung vit lon. One is to pull the duck fetus completely out of the eggshell and put it in a small bowl. You then enjoy it slowly, piece by piece, accompanied by the irreplaceable herb and a mixture of salt, pepper, and chili. You can also add kumquat juice to the mix it if you like a sour flavor. The second way might make the food less scary for you. Put the narrow end of the egg in a tiny bowl and then use a small spoon to crack the wider end. Drink the soup which is made during the cooking process first, and then eat the rest of the egg without looking at the whole baby duck.

As you’re eating it, the aromatic scent of pepper and kumquat along with the spicy chili will not only drown out the pungent smell of duck egg but also harmonize the flavors providing you with one of the most exceptional food experiences ever.

Are you wondering what this dish actually tastes like? It’s like eating a mixture of fish and meat, but the texture is softer and it’s even more nutritious. In addition to the embryo, the central egg has a distinct taste comparable to regular boiled eggs: harder, more fragrant, and more spongy. Trung vit lon is a nutritious dish and is considered to be medicinal because it nourishes the blood, helps the body to grow quickly, and improves physiological ability.

But that’s not all there is to know about trung vit lon. Vietnamese people don’t just eat it in the traditional way. We’ve created many varieties of delicious trung vit lon dishes. One of these is fried duck egg with tamarind sauce.

Filipino balut is incubated for 16 days so you can find balut at any development stage, while FFDE in Vietnam is incubated until a baby duck is formed which takes 19 to 21 days.

One of the special dishes made from FFDE is vit lon xao me (fully-formed duck egg with tamarind sauce). The sweet and sour tamarind sauce is added after cooking the duck eggs in a hot pan and this is the reason why the dish is so popular. Additions like peanuts and laksa leaves combine to give the food a unique and unforgettable taste. 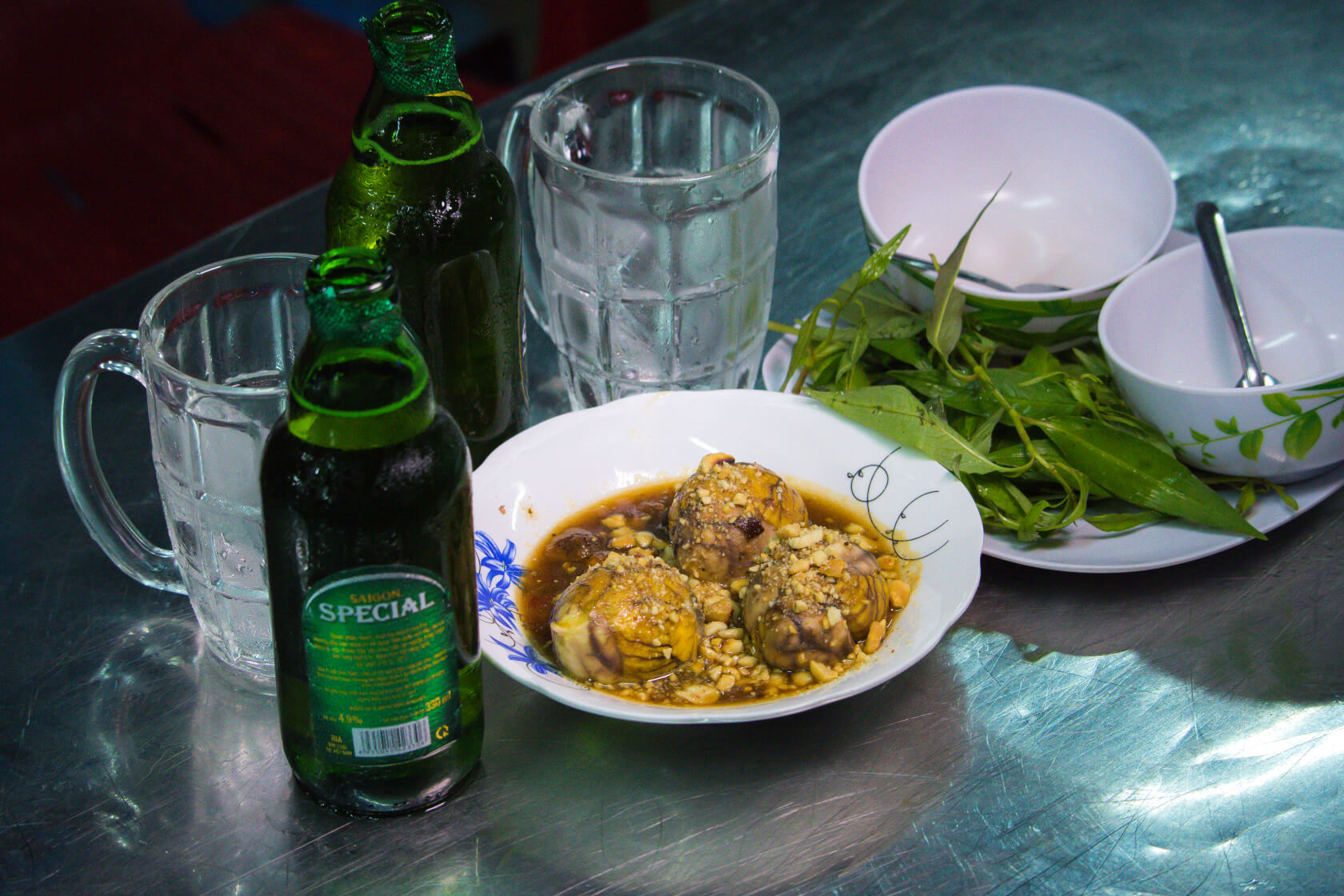 Let’s watch the video and see how our expert from the Best Ever Food Review Show overcomes this culinary challenge.

They’re crazily popular among the Vietnamese locals, especially those who like drinking and hanging out with friends at sidewalk beer shops. It seems like nobody can figure out the origin of these foods and maybe no one really cares as long as they have that indescribably yummy taste.

The trung cut lon looks the same as the trung vit lon (FFDE) except it’s a third of the size. Consequently, people usually have from five to ten quail eggs each time they order. Sounds too much to handle, right? But believe me, you’ll probably want more. This food can be eaten with tamarind sauce just like trung vit lon. Keep reading until the end of the article to find out where to find these amazing dishes.

And last but not least, here comes the half-formed duck egg. Many foreigners call them “half-formed” because they’re not incubated until the embryos form into a duck but stop when the yolk and the egg white mix, making the food a lovely yellow color. Moreover, it’s soft on the outside and spongy on the inside. You only need to boil the eggs for eight to ten minutes, then enjoy them in the same way you do the fully-formed ones.

You can find all trung vit lon, hot vit dua, and trung cut lon on any cart on the street which has a very loud, long, and unique call sign (you can listen to it in the video, so you know what it sounds like). Who knows? If you find it interesting, you can try to learn it by heart. It can even be your first Vietnamese sentence! Remember, only these carts serve the half-formed duck egg. You can’t find it anywhere else.

***Many snail restaurants in Sai Gon serve trung vit lon and trung cut lon with tamarind sauce, but Onetrip knows the best. Check it out in the video.

So, feeling brave, are you? Have a go at it and post your adventures in the comments! If you also want some more fun, YouTube has a lot of balut-related videos that are always hilarious to watch!