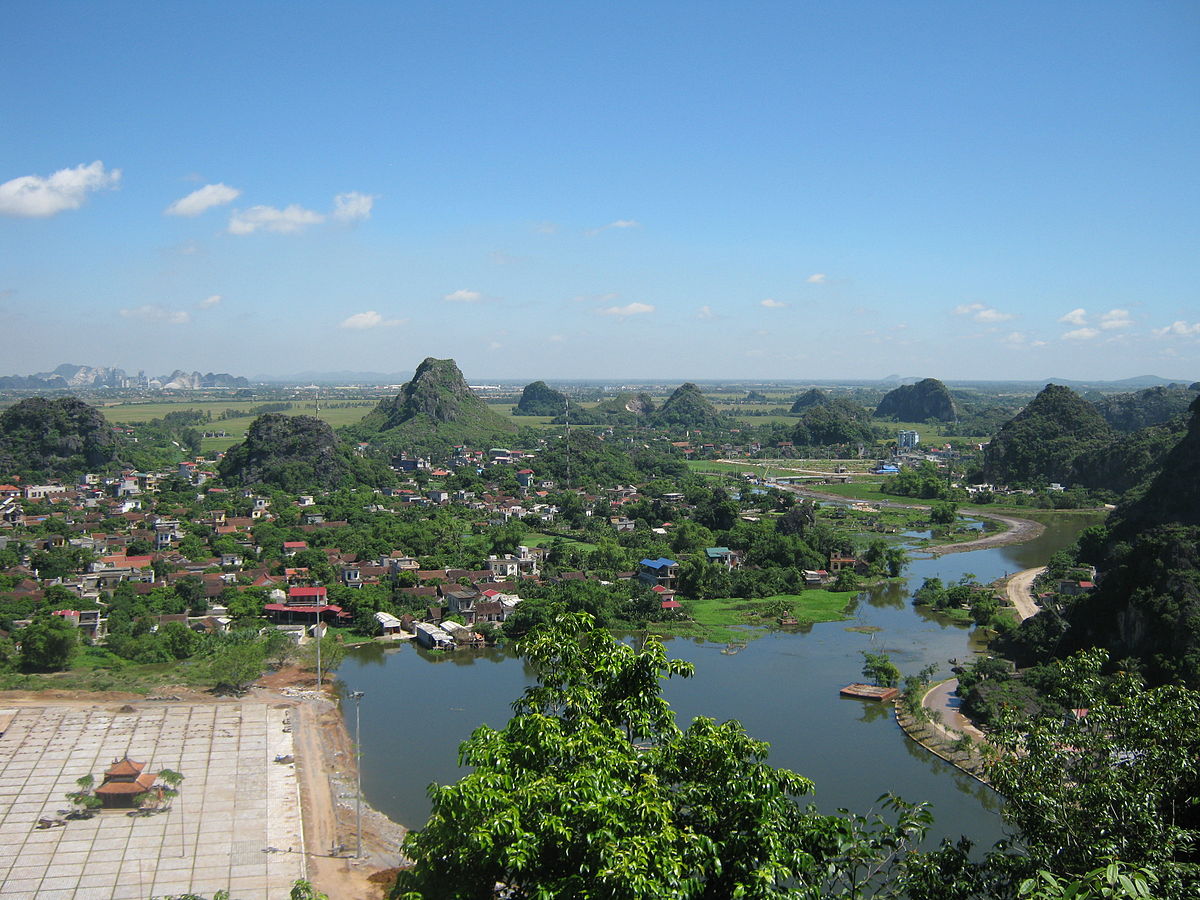 Hoa Lu Ancient Capital belongs to Trang An landscape complex, a very famous tourist attraction of Vietnam. In June 2014, Trang An complex was recognized as a UNESCO World Heritage Site. Not only does Hoa Lu show off the majestic beauty of nature, but it also contains the history of Vietnam in the tenth century where many important events of our nation took place.

Hoa Lu Ancient Capital will tell you the story of the first three centralized feudal states of Vietnam: the Dinh Dynasty, the Le Dynasty, and the Ly Dynasty. In fact, during Vietnamese history, two dynasties were ruled by the Le family, so in order to distinguish these two, we call them the Early Le Dynasty and the Later Le Dynasty.

From the middle of the tenth century, northern Vietnam independently ruled their land apart from the Chinese dynasties. However, due to political separations, the country was divided into 12 parts ruled by 12 different generals. These different kingdoms continuously fought one another in order have absolute power but for many years the country remained divided. Then, there was a man named Dinh Bo Linh who gathered an army to fight the 12 armies. This man was very talented, and step by step he defeated all of the generals. Eventually, in 968 he reunified the country, became a king, and named the country Dai Co Viet, which means the great country of the Viet people. This is the first absolute monarchy of Vietnam.

After 12 years of being a king, Dinh Bo Linh was assassinated. Many details surrounding the assassination are still disputed to this day, history can’t even identify the killer, but it might relate to one of the five wives of Dinh Bo Linh, Lady Duong, and a general named Le Hoan. It was said that Lady Duong and Le Hoan conspired against the king. After King Dinh Bo Linh died, the son of the king and Lady Duong became the next king, but he at that time was merely a six-year-old boy.

In early 980, the Tong Dynasty of the Chinese people started to invade the country of Dai Co Viet. Lady Duong took that chance and convinced other generals to let Le Hoan become the king to lead the Vietnamese army and people to fight against the Tong army. Le Hoan won the throne of Dai Co Viet, marking the beginning of the dynasty of the Early Le.

King Le Hoan was also a talented general. His army pushed the Tong’s army back to the border. Up until 1009, a general of the Early Le Dynasty named Ly Cong Uan was enthroned when the Le family couldn’t successfully rule the country. Ly Cong Uan became the founder of the Ly Dynasty. In 1010, King Ly moved the capital of the country from Hoa Lu to Dai La and changed the name of Dai La to Thang Long (meaning flying dragon), which is Hanoi capital city of present Vietnam.

Hoa Lu was the capital of Vietnam for just 42 years, but it holds the history of Vietnam and the three dynasties of Dinh, Early Le, and Ly. It’s not a random choice that King Dinh choose Hoa Lu as a capital. Many high mountains watch over the valley of Hoa Lu, acting as a natural barrier to protect the capital. After King Ly moved the capital to Thang Long, Hoa Lu was still an important military base in the north of Vietnam.

How to Get to Hoa Lu

Hoa Lu is about 100 kilometers away from Hanoi to the southeast. To reach Hoa Lu, you can select one of two ways:

Take a bus directly from Hanoi to Hoa Lu:

In order to meet the need of the developing tourism industry in Hoa Lu as well as in Ninh Binh, there are a lot of hotels, hostels, and homestays offering good services with reasonable prices. Around Hoa Lu and Ninh Binh city, you can easily find a comfortable place to rest.

I recommend these accommodations:

What to Do and See in Hoa Lu Ancient Capital

In the past, Hoa Lu capital had an area of 300 hectares, including three smaller areas called Outer City, Inner City, and South City. These three cities created a shape like the number 80. Outer and Inner City stood next to each other much like the number 8, and South City is the bigger town alongside the other two. The South City was a military base and locals called it Trang An city. The other two cities were used to place the imperial building and locals called it Hoa Lu city.

As I mentioned above, King Dinh is the king of the first centralized feudal state of Vietnam. He reunified this area and is therefore a very important figure in history. To commemorate and worship him, locals built this temple.

In the temple of King Dinh, locals also worship his sons, his wives, and his subordinates. This temple faces Ma Yen mountain, in which the tomb of King Dinh is located.

This temple is just 500 meters away from the temple of King Dinh and it’s used to worship King Le, the first king of the second feudal state of Vietnam. This temple is smaller than the temple of King Dinh. In addition to worshiping King Le, it also worships Pham Cu Luong – the general who helped King Le to take the throne, Le Ngoa Trieu – the last King of the Early Le Dynasty, and Lady Duong – King Le’s wife.

These two temples were constructed with attention to Vietnamese ancient architecture. Most of the statues were sculptured hundreds of years ago, displaying the high quality of Vietnamese sculpture.

Nhat Tru Pagoda was built in the tenth century, which means it’s now more than 1,000 years old. This pagoda was used for meetings between the monks. At that time, the monks occupied a very high class in society and they were usually invited by the king to discuss national problems.

Nhat Tru means one column, because this pagoda has an eight-faced column showcasing the writings of Buddha’s words. About 2,500 characters were written on these eight faces. It is estimated that this column was created around 995. It is one of the Vietnamese national treasures.

After discovering Hoa Lu Ancient Capital, in Trang An complex, you can also visit other beautiful places.

Tam Coc, meaning three caves, is also known as the Ha Long Bay on land. The three caves of Tam Coc were created by the river of Ngo Dong flowing through a mountain. You can take a boat to go through these caves and watch the majestic stalactite formed by nature.

Bich Dong means the celadon cave, referring to the stalactite’s celadon color. It is recognized as the second greatest cave of Vietnam (after Huong Tich cave in Hanoi city). Bich Dong is also the name of a pagoda – Bich Dong Pagoda.

Trang An Ecotourism Area will also lead you to many wonderful caves formed by the river. You can also visit the temples and the pagodas in this area.

Bai Dinh Pagoda is the largest pagoda in Vietnam with an area of 539 hectares, including 27 hectares of the old pagoda and 80 hectares of the new pagoda. The old Bai Dinh was built in 1136 and it was reconstructed and built up in 2003. Bai Dinh Pagoda possesses many records in Vietnam and Asia: the biggest golden-copper Buddha statue in Asia, the longest lobby of Arahants, the biggest copper bell in Vietnam, and the highest Buddhist tower in Asia.

An experienced and knowledgeable guide will accompany you on this trip. Our Onetrip tour guides not only uncover places with rich history and beauty, but they also tell you detailed information about what you’re seeing. Onetrip tours will take you to a local host so you can experience the area like a Ninh Binh citizen, eating and chatting with local people. So why not sign up for a tour with Onetrip?

I hope my article can give you some useful information on visiting our ancient capital and other places to go in Ninh Binh. Ninh Binh is a special land because of its beauty and its importance in military affairs, you can follow our blog to explore more about Ninh Binh as well as Vietnam.

I suggest these articles:

Into the Wild in Ninh Binh: Your Expert Hiking Guide!