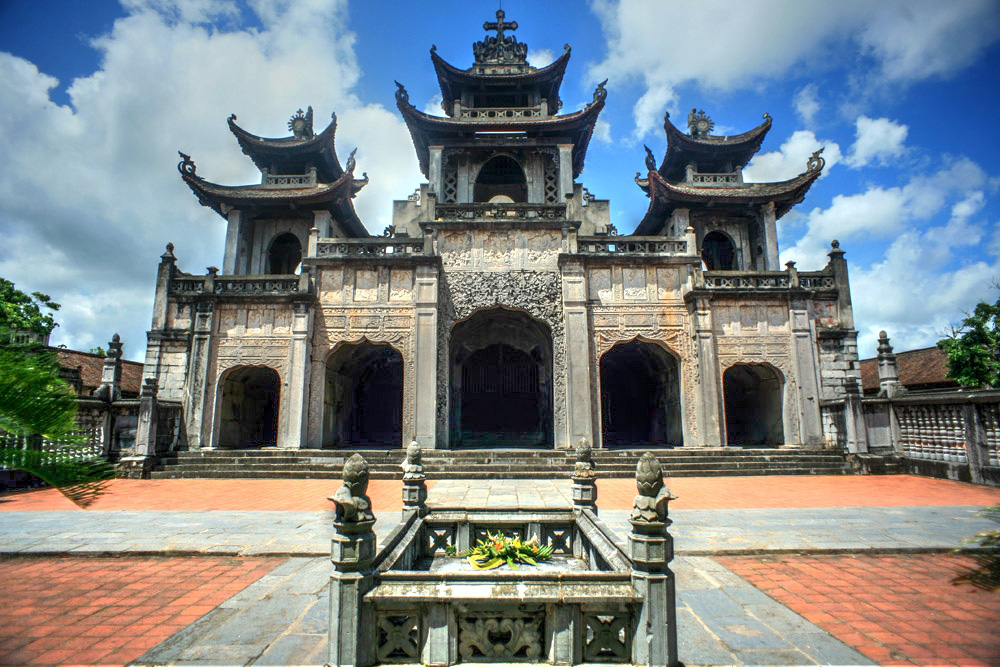 Today, when you visit Ninh Binh, the very thing that you should not overlook is the mighty Phat Diem Cathedral, a building that brilliantly combines Eastern royal architecture with Western religion. There is a lot more to discover behind the chiffon of its history and construction. In this article, we are going to take a look at the main milestones of the cathedral’s history since its groundbreaking entrance until today.

Who Built the Place?

Father Six (Pere Tran Luc) took responsibility for the cathedral’s construction, both its architectural design and engineering issues, after a council agreed to build this great building. He tried to apply the essence of the Vietnamese architecture to this cathedral, making it a pagoda holding Jesus’s statues and teachings.

Many controversies surround the life of Father Six, an extraordinary scholar. Some accused him of having supported the French in their first attempt to invade Vietnam. Some praised him for his tremendous contribution in building Christianity in Vietnam, spreading faith in God and, most importantly, encouraging people in his town to live their life kindly. Let the shadow of the past rest in peace. We admire him for his very last demand right before his death: he wanted to rest in the middle of the cathedral’s entrance path, so that everyone would step on him as they walked by.

Scholar Nguyen Cong Tru – an extraordinary mandarin alive in the Nguyen Dynasty – headed North from Hue capital under the demand of the king. He discovered this area of Ninh Binh province and named it Kim Son district (meaning the district of the Golden Mountain) and Phat Diem town (meaning the town that creates beauty).

In 1875, the Bethlehem cave (named after the cave where Christ was born) was constructed first to test the durability of the foundation. After its success, the complex construction began.

There are hardly any religious sites in Vietnam that took over two decades to finish. At the beginning, Kim Son district was covered in swamps, making it almost impossible to construct any major sites. For almost a decade, people needed to move tons and tons of stone, wood and sand, from about 200 kilometers away, into the site to stabilize the ground. Afterward, regardless of the very bad infrastructure conditions (the roads back then were like trails), countless ironwood trees were transported to build the cathedral. Imagine the substructure of this cathedral. Up to roughly a million wood piles were pressed twenty to thirty meters deep into the ground! What a construction of the century!

This site has three human-made stone caves, five chapels (one of which is made totally from stone), one main church with a bell tower (known as Phuong Dinh), a big lake, and countless incredible decorative features. Its architecture particularly resembles a typical Eastern temple and follows the shape of the word “Vuong” (king) in Chinese. A calming lake sits in the front and a small hill rests in the back of the site, representing good Eastern architecture.

Let’s walk through the main parts of the cathedral:

There are five nine-meter tall entrances leading into the cathedral, all are made from stone. You can find sculptures of six angles, beneath each of them is a sentence reminding people of the right attitude when praying: “When you pray, brothers, do believe that everything you beg for can come true”; “Let’s pray and ask for things the way a tax collector and a leprosy patient do”; “Let’s prepare your spirit, don’t challenge your God”; “How fearsome this place is: this is the God’s House”; “Brethren, do let the door open to you; do forgive if you have any resentment towards anyone”; “Brethren, let’s wake up and pray to stay away from temptations”.

Visit the Cathedral and you will also witness many small hills hugged together peacefully inside the campus. Here’s a secret, they weren’t there in the beginning. The hills were created during construction!

1925: The statue of Saint Maria was sent to the Grotto of Our Lady of Lourdes.

1939: A two-floor bell tower was built in front of the stone chapel.

1972: The historic B52 bombing battle that horrifically swept Hanoi away in 1972 did heavily destroy parts of the complex. Christians in Phat Diem town and neighboring areas stood together to recover the saintly complex.

1994 – 2000: The whole site underwent heavy reconstruction to ensure its safety and long life. The original design was strictly followed as if to express absolute respect towards the predecessors.

Over a hundred years have passed since Phat Diem complex was completed. Today, the complex is recognized as a national heritage site, and has been proposed as a UNESCO World Cultural Heritage. Yet, regardless of the name, the cathedral stands still, after ups and downs and even the horrific bombing battle, as if to reassure people of their faith and compassion that Christ had sacrificed his whole life to teach the people.

How to Get There

From Ninh Binh city, take the 28-kilometer route to Phat Diem Cathedral. The road is relatively straightforward, but have your 4G always available in case of hiccups. From Ninh Binh city, you just follow the National Road No. 10, until you see on your right The Civil Committee of Kim Son District. From there, you can ask the locals to show you where to find the cathedral, you’re almost there. Before you depart, I suggest eating a large meal to tide you over. If you take a taxi, it will cost around 25 USD.

If you are interested in cultural and religious sites of Vietnam, check out the Marble Mountains of Da Nang and the Hoa Lu Ancient Citadel in Ninh Binh.

Wondering where to stay, eat and what to do in Ninh Binh, check these articles out.