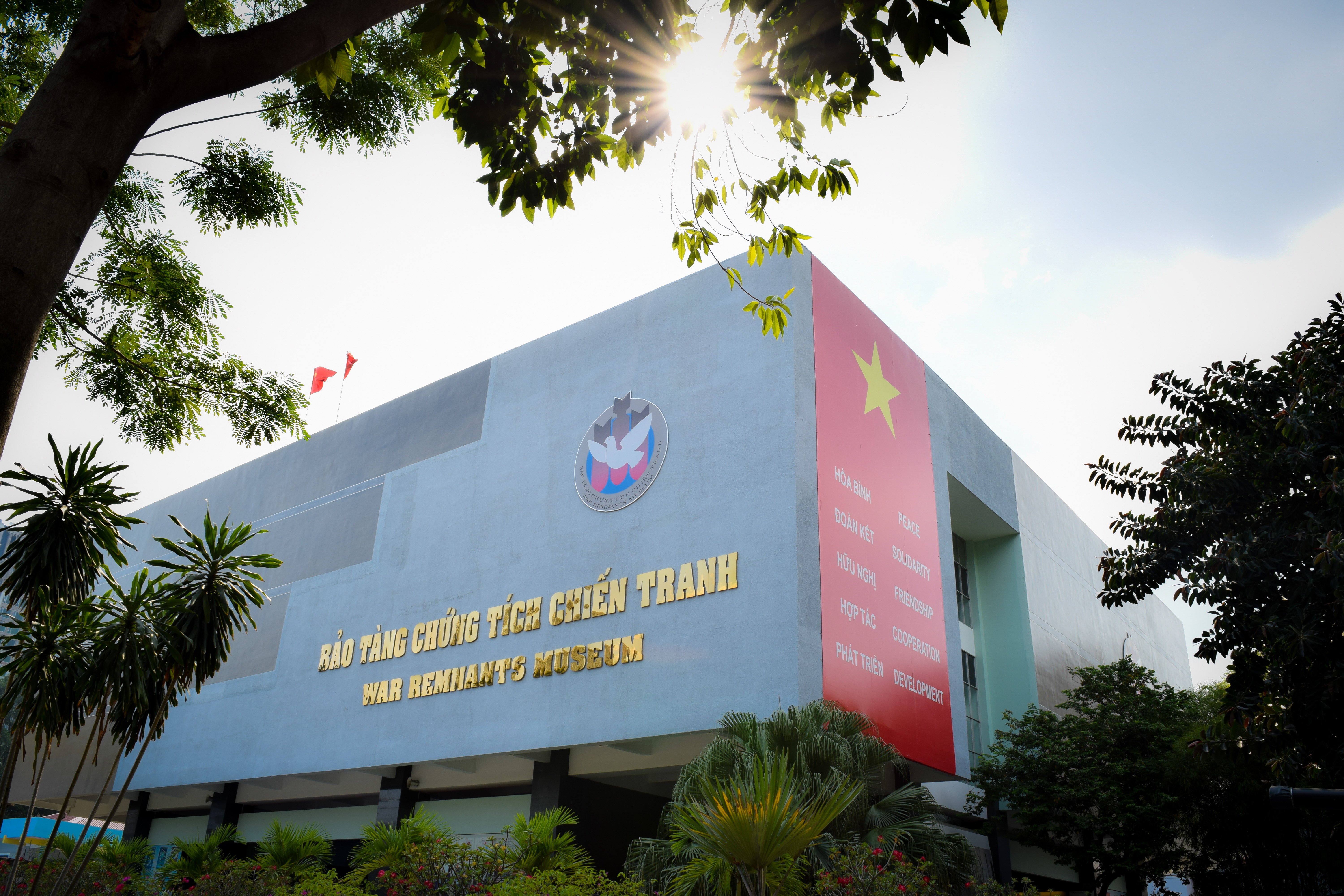 It has been 40 years since the war against the Americans came to an end, and the remaining traces of the war are gradually fading to the relentless socio-economic development. However, the pain is still there. For the younger generation today, what has happened in the past is now just stories, but for many people who have once experienced war, the painful memories still exist. The War Remnants Museum offers half a million visitors each year a narrative of what Vietnamese people have experienced in the years that they fought for their freedom.

Established by the Vietnamese government on the 9th of September, 1975, the museum was originally called “The House for Displaying War Crimes of American Imperialism and the Puppet Government”. Then in 1990 it was renamed to the “Museum of American War Crimes”, and then not until the 4th of July, 1995, did people start to refer to it as the “War Remnants Museum”.  The War Remnants Museum is a member of the World Peace Museum and World Museum Committee. The museum specializes in researching, collecting, preserving and displaying evidence, the crimes, and consequences of the Vietnam War.

At present, the museum has eight regular special exhibitions and many mobile exhibitions to serve the public. It is an attractive destination in Ho Chi Minh City, especially for foreign visitors. Many Americans have come here to gain the most accurate view of the scars of the decades of war Vietnam has endured. In 2013, the world-famous travel website Trip Advisor placed the Vietnam War Remnants Museum in the top five of the 25 most fascinating museums in Asia.

Outside the museum’s high walls, there is a courtyard filled with military vehicles and unexploded ordnances. These artifacts clearly leave visitors with a strong impression since not many people get to see a Huey and Chinook helicopter or a South Vietnamese Air Force’s tank or fighter jet face to face. The military equipment also includes an A-1 Skyraider attack bomber, M48 Patton tank, an A-37 Dragonfly attack bomber, an F-5A fighter and a BLU-82 “Daisy Cutter” bomb.

However, the most heartbreaking artifact for visitors is probably the guillotine. This machine was brought to Vietnam by the French colonialists to suppress the people during the resistance war for independence of the country in the early 20th century. After the Geneva Agreement, the old Saigon authorities took this guillotine around southern provinces to execute patriots. After the country was fully liberated, this murder machine was brought here to prove the colonial war crimes.

Going to the far-left side of the main hall, you’ll find yourself in a building reproducing the “barbed-wired tiger cages” in which the South Vietnamese government kept political prisoners. These cages are so tiny (only 2.7m x 1.5m x 3m each) but were used to imprison up to 14 people. There are also mannequin bodies positioned inside for you to gain a clearer picture.

The ground floor of the museum is dedicated to a collection of press and propaganda showing hatred and protest to the war.

Inside, the museum is divided into three levels devoted to a particular theme related to the war. The ground floor of the museum is dedicated to a collection of press and propaganda showing hatred and protest to the war. One of the most notable section is the Requiem Exhibition which houses a collection of photographs compiled by legendary war photographer Tim Page. This graphic photography illustrates a phase of painful history and reveals unknown stories about war to people, especially to Westerners. Each picture is accompanied by fact cards in English, Vietnamese and Japanese so you can get up close and personal with these historical moments. In addition, there are three jars of preserved human fetuses showing haunting effects of dioxins and dioxin-like compounds. Many travelers are likely to be horrified by such shocking displays.

Read more: What to do if You Only Have One Day in Saigon.

In order to attract a larger number of tourists, in addition to the daily activities, the museum often organizes activities with different topics such as culture and cuisine. The culinary programs will introduce wartime dishes like tapioca, rice gravy, banh tet, banh vung, etc. On the other hand, cultural programs with the theme of love in war are very popular to the public.

According to the museum’s own estimates, 70% of visitors to the museum are foreigners. Pictures of international visitors silently standing in front of a photo or an artifact with watery eyes seem to have become familiar here. Because in their minds, even though they knew about the Vietnam War before, they could hardly imagine such heavy and devastating consequences. Despite claims that the exhibits are an entirely one-sided affair, focusing on anti-American propaganda, the War Remnants Museum has successfully portrayed the brutality of war. Children and the faint of heart may find some pictures and displays disturbing so keep that in mind when you plan for a walk through the museum.

All days of the week (including holidays)

However, the best time to visit the museum is in the morning so you can avoid the tourist trap later in the day.

How to get there: Suggested means of transportation are taxi, motorbike, or bus. The museum lies evidently in the corner between Vo Van Tan Street and Le Quy Don Street, you can’t miss it. For bus-goers, there are three bus routes that can take you to Saigon War Remnants Museum: 06, 14, 28.

Dress code: Casual but not too revealing

If you are looking for a dose of war history and want to do something different with your trip, this is the place to be. The War Remnants Museum will surely turn your ordinary visit to Ho Chi Minh City to an intellectual yet remarkable trip.

After visiting the Saigon War Remnants Museum, remember that there are hundreds of attractions waiting for you to explore! Think about embarking upon a Onetrip Saigon Tour, and together with your knowledgeable guides, nibble on the tastiest street food, hang out with passionate local guides, and explore the most outstanding hidden city destinations.

Read more: An Insider’s Guide to The Saigon River

Enjoyed this article and would like more fun information on what to see, do, and eat in Vietnam? Follow us at The Christina’s Blog!