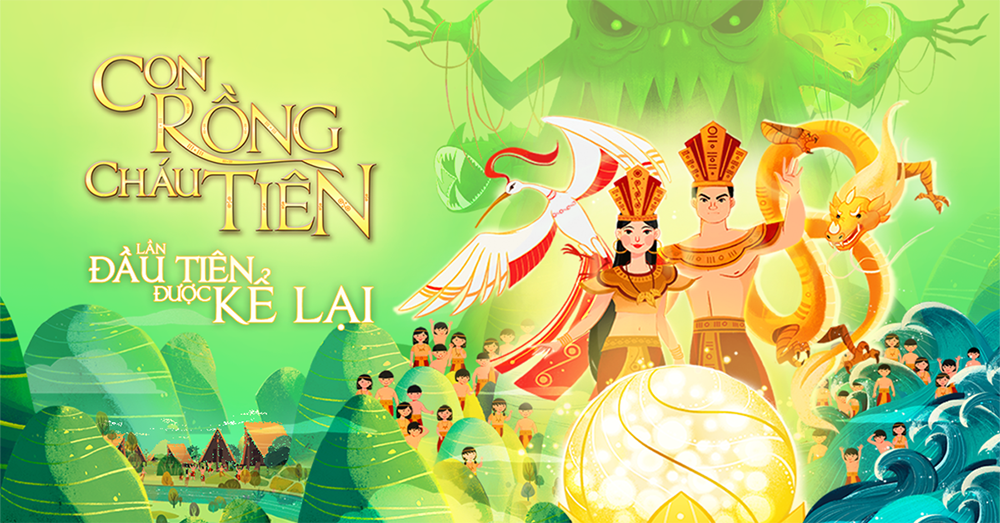 With 4,000 thousand years of history under its belt, the literary treasure of Vietnam is very plentiful, including countless myths, legends, and folk tales. I grew up hearing these stories from my mother, read them in my textbooks in school, and watched cartoons based on these stories on television. These myths and legends are a part of my childhood. I want to share these interesting stories with you so you can learn a little more about Vietnam. Just by listening, you can explore the historical events and the ancient folk stories of the Vietnamese people through these stories.

The Descendant of Dragon and Fairy – Con Rong Chau Tien

The Descendant of Dragon and Fairy is a legend about the origin of the Vietnamese people. Lac Long Quan was the grandson of the Dragon King of the sea and Au Co was the daughter of the Holy Bird in the high mountain. She is also known as a fairy. They met each other and fell in love. After their marriage, Au Co bore a pack of one hundred eggs, then they hatched into one hundred sons. This large family lived happily on the mountain.

After a long time, Lac Long Quan missed his home, so he decided to return to the sea and he brought 50 sons with him. The remaining 50 sons stayed on the mountain with their mother. The eldest son who remained on the mountain was the acclaimed King of Van Lang and became the first king of Vietnam, the first Hung King. Today, Vietnam honors the death anniversary of the Hung Kings on March 10th of the Lunar year.

Under the reign of the sixth Hung King, a 60-year-old woman lived in Phu Dong village or Bac Ninh province today. One day, she found a huge footprint in the field. Her curiosity got the better of her and she set foot in this footprint. She became pregnant on her way home. She gave birth to a son and named him Giong. Giong was an interesting child. Even at three years old, he could not speak.

At that time, the northern country wanted to occupy Vietnam. The Hung King ordered a messenger to travel across the country to find a talented general. Giong suddenly asked his mother to invite the messenger into their home. Giong told the messenger to cast an iron horse and an iron sword, then he would fight against the armed aggressor. After the messenger left, Giong stretched his shoulders and turned into an adult. No matter how much rice and meat he ate, he never got full. No matter how big his clothes became, they were always tight on him.

After the messenger told the king of Giong, he brought the iron horse and sword to Giong’s house. Giong rode the iron horse to battle and used the iron sword to kill the aggressor. When the sword broke, Giong pulled up the bamboo bushes on the road and threw the bushes at the enemy. He killed the enemy and suffered a heavy defeat.

After defeating the aggressor, Giong rode the iron horse straight to the sky. The lakes and ponds today have traces of iron horse footprints. The forest burnt by the iron horse was named Chay village, meaning “burnt” village. The local people built a temple worshipping Giong and called him God Giong, or Thanh Giong in Vietnamese.

Once upon a time, the 18th Hung King had a beautiful daughter named My Nuong. The Hung King wanted to choose a gentle and talented husband for the princess, so he staged a competition. Lots of young men from all over the country came to the capital city for the competition but no one was chosen by the king. Suddenly, two young men, Son Tinh and Thuy Tinh, appeared at the same time and entered the competition.

Son Tinh was the god of the mountain and had the power of moving the mountain and forest. Thuy Tinh was the god of the sea and had the power of controlling the rain and water. They were both talented and the Hung King didn’t know who to choose. Then, the king ordered the two men to find special betrothal gifts including one hundred steamed glutinous rice balls, one hundred Vietnamese square sticky rice cakes (banh chung), a pair of elephants with nine ivory tusks, two roosters with nine spurs, and a pair of horses with nine pink manes. The man who provided the wedding gifts first would get to marry the princess.

Because Son Tinh lived on the mountain, he could find these gifts easier than Thuy Tinh who lived under the sea. Son Tinh brought the gifts in the early morning the next day and took the princess to the mountain. Thuy Tinh came later and failed. He was angry, and used his power to make rain for days until the water reached the top of the mountain where Son Tinh and the princess lived. However, no matter how tall the water level rose, Son Tinh grew the mountain higher.

After several months of this, Thuy Tinh couldn’t defeat Son Tinh, so he retreated and so did the water. However, Thuy Tinh still could not forget this feud. Every year, he raises the water to fight with Son Tinh. This myth explains the natural phenomenon of flooding according to ancient folklore.

My Chau Trong Thuy or The Magic Crossbow

The Au Lac dynasty followed the Van Lang dynasty of the Hung Kings. An Duong Vuong was the king of the Au Lac dynasty. He was a good king who cared for his country. Thus, the Golden Turtle God gifted the king his turtle claw to make a magic crossbow. An arrow shot from this crossbow could kill one thousand enemies and if he shot the bow one hundred times, it would always hit the target a hundred times.

At that time, the Nam Viet, a mighty country in the north, often attacked Au Lac but always failed due to the magic crossbow. Trieu Da, the king of Nam Viet, made another plan to invade Au Lac. He heard that An Duong Vuong had a beautiful princess named My Chau. The king used the excuse of reconciliation to propose marriage between My Chau and his son, Trong Thuy, who would later be a spy.

With the consent of An Duong Vuong, the wedding ceremony was organized sumptuously. According to custom, the bridegroom had to stay at his wife’s house for a while. Day after day, the love between Trong Thuy and My Chau became stronger. One day, Trong Thuy asked My Chau why Au Lac was a small country but could defeat a mighty country like Nam Viet. Because My Chau loved and trusted her husband as much as possible, she revealed the secret of the magic crossbow to him. She also disregarded her father and took her husband to see the magic crossbow in the forbidden tower.

Later, Trong Thuy stole the magic crossbow and exchanged it for a fake one. Then, he lied to the king and told him that he missed his home and wanted to visit his family for a while. When he said goodbye to his wife, Trong Thuy worriedly asked how he could find her if there was any conflict between the two countries. My Chau said that she had a goose feather coat. She would pluck the feather, so he could follow this sign and find her.

When Trong Thuy gave the magic crossbow to his father, Trieu Da declared another war with Au Lac. An Duong Vuong wasn’t worried and continued using the crossbow. But the fake bow was not magic and the army of Nam Viet almost captured the citadel. An Duong Vuong hurriedly jumped on a horse, My Chau behind him, and escaped from the citadel to the south. After many days on the horse, they arrived at a mountain near the sea.

Unexpectedly, the enemy chased them to the mountain. With nowhere to go, An Duong Vuong called for the Golden Turtle God to save him. The god appeared and told him that the enemy was sitting behind him. He took out his sword to kill My Chau, then jumped into the sea to commit suicide.

Trong Thuy followed the goose feather to find My Chau, then found her corpse near the coast. Having loved his wife and regretting what he did, Trong Thuy jumped into a well to commit suicide. It is said that My Chau’s blood flowed into the seawater. The oysters drank her blood and turned into pearls. These pearls, which were washed by the water in the well where Trong Thuy died, would be extremely luminescent.

These are the four most famous and compelling myths in Vietnam. Maybe when it floods or when you’re at the base of a large mountain looking up, you’ll remember these stories. There are even more interesting stories in our history that you can find in these articles below.

Female Icons of Vietnam Through The Centuries

Vietnamese Temple of Literature in Hanoi: A Thousand Years in A Blink

If you enjoyed reading this article and would like some more fun info about what to see, do, and eat (and a bunch of interesting cafes!) in Vietnam, follow us at The Christina’s Blog!