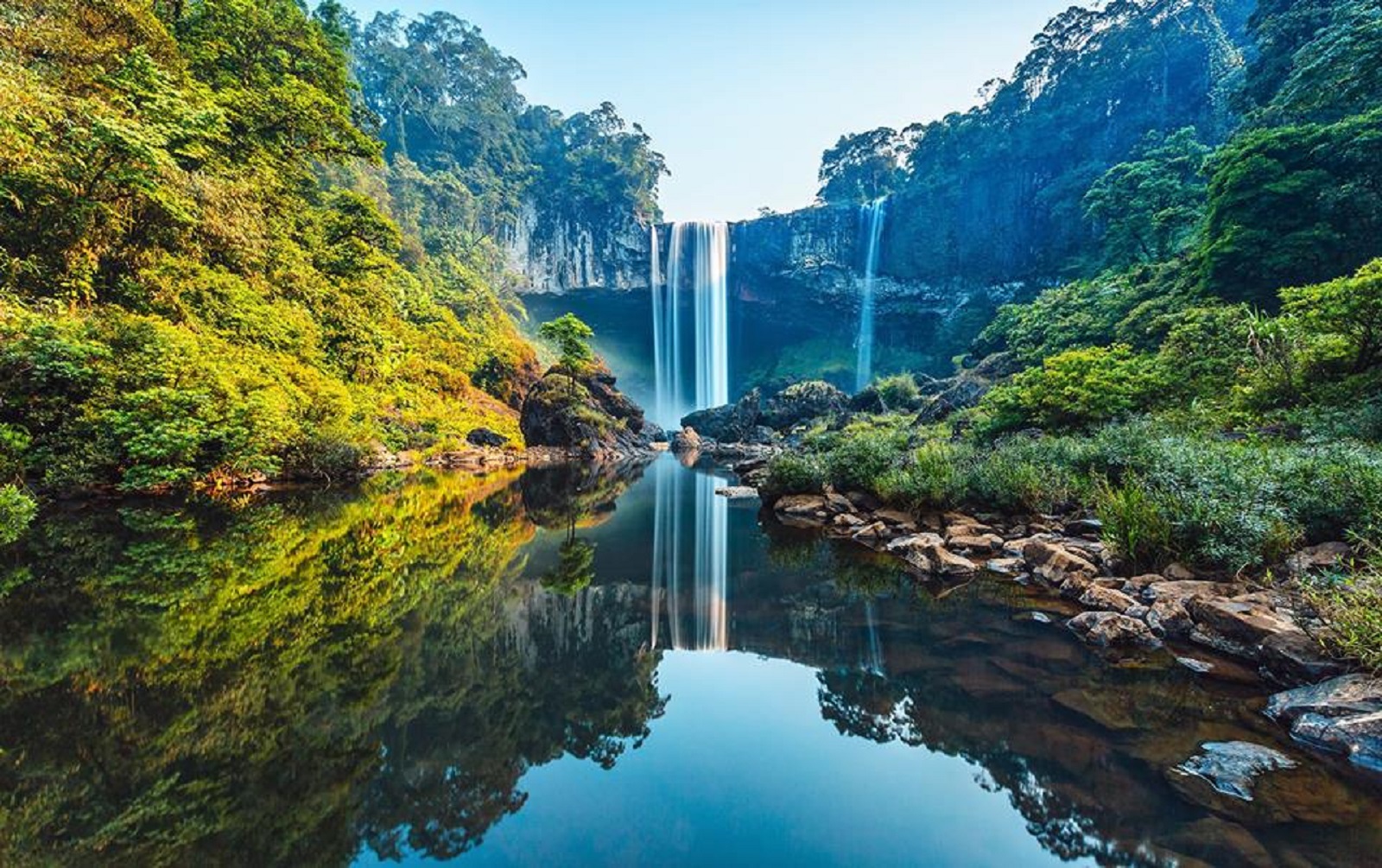 If you find that there is a little wiggle room in your Vietnam itinerary, consider visiting Pleiku. After reading up on a bit of history, check out what this place has to offer and maybe you’ll end up making the wiggle room.

Gia Lai is a province located in the Central Highlands and it’s the second largest province in Vietnam. The Jarai, a native people of Vietnam with the largest population in the province, are credited with the origin of the name. Pleiku is the central city of Gia Lai and its name also comes from the Jarai, meaning northern village or highland village. With the exception of Da Lat, the tourism industry in other provinces in the Central Highlands is not developed.

With the exception of Da Lat, the tourism industry in other provinces in the Central Highlands is not developed. However, the exploration potential is diverse with the abundance of natural landscapes such as majestic mountains and beautiful waterfalls, sea lakes; and even artificial landscapes such as tea farms, coffee farms, rubber tree gardens; and the culture of the local ethnic minorities of the Jarai and Bahnar. With all these destinations to see and cultures to experience, it might be difficult to pick the right places for you. Check out my list below to help craft an acceptable itinerary for your travels to this most outstanding province of Gia Lai.

Before the 1840s, the ethnic people lived like primitive men. Their home was the jungle, their occupation was hunting and farming. They lived within a small group and established a village. Every village had a village head who led all the activities and festivals in the village. From the end of the 19th century to the beginning of the 20th century, the French missionaries came to the Central Highlands to spread Catholicism. After that, the French colonial government divided this area into administrative units and built modern buildings. These facts made the ethnic people change their habit of living. However, you can still find some original ethnic villages far away from the city center nowadays.

In the Indochina War, the Central Highlands in general and Pleiku in particular served as critical positions and had an important influence on the success of the North Vietnamese. The last battle of the First Indochina War was the Battle of Mang Yang Pass which happened in Gia Lai province. At this battle, Northern soldiers fought bravely and won against the French Army which led to the end of the colonial regime of French colonialism in Vietnam. In the Second Indochina War, the North Vietnamese launched Campaign 275, then captured the entire Dak Lak province. Under the mighty military power of the North Vietnamese from Dak Lak, the South Vietnamese abandoned Pleiku and Kon Tum. This event led to the capture of South Vietnam by the Northern Vietnamese and the end of the war a few months later.

Now that you know a little bit about Pleiku’s history, it’s time to explore this unique place.

Located 30 kilometers to the northeast of Pleiku, Chu Dang Ya volcano makes its home in Ploi large village, Chu Dang Ya commune, Chu Pah district. Chu Dang Ya in the Jarai language means tough ginger. This volcano has been inactive for millions of years, hidden away in the middle of an immense forest surrounded by century-old trees. These trees have hollow trunks due to a worm infestation but they’re still alive, so you can sit or hide in the trunk.

The lava has left red basalt soil which is good for planting crops such as corn, sweet potato, pumpkin, and longan. The natural scenery around the volcanic area is diverse. It even changes from season to season, as does the rest of Vietnam, turning from a ripe green to golden yellow. During the rainy season, the mountain is covered by the vast green fields of sweet potato and taro. From the end of October to the beginning of December, yellow wild sunflowers are in bloom against a background of green trees.

In the dry season, you will not find many green trees, so the landscape around the volcano is not as beautiful as in the rainy season. However, you can hike up to the top of the volcano to see the beautiful view below. Make sure to go in the early morning or evening because the weather is cooler and you can see the sunrise or sunset.

Pleiku has a famous destination, a calm lake in the mountains, named T’Nung lake. In fact, it is a natural freshwater lake formed in a crater that has been shut down for hundreds of millions of years and is located about seven kilometers away to the northwest of Pleiku city.

T’Nung lake has another name, Sea Lake, because the lake area is very wide. It is 228 square hectares big in the dry season and up to 400 square hectares in the rainy season. When the wind passes, the lake ripples and forms waves as strong as the sea.

T’Nung lake provides a huge amount of different kinds of fish for the Central Highlands. Surrounded by the mountains, the area around the lake is also home to rare animals such as geese, kingfisher, Ko Tuc bird, Ko Vong bird, and more. You can rent a motorboat to ride around the lake to watch local people catch fish, and witness the beautiful landscape at sunset.

Located in La Sao, 30 kilometers away from Pleiku, Nine Floor Waterfall is not really high. However, it stretches along rugged cliffs and is divided into nine separate floors. Each floor is from five to ten meters high and the last two floors are about 15 meters high. There are many cascades that are easy for visitors to climb. If viewed from above, the waterfall looks like a dragon bending before flying into the sky.

The surrounding forest ecology is still quite primitive, contributing to the wild beauty of the waterfall. This is a good place for going on a picnic, bathing, and relaxing.

The forests have many kinds of ancient trees that are, you guessed it, hundreds of years old, rare plants, and rare five-leaf pine trees. Kon Ka Kinh is also the main habitat of an extremely rare species in Vietnam, the gray-shanked douc langur. It is one of the 25 most endangered primate species in the world.

At Kon Ka Kinh, you can visit villages of the Bahnar ethnic minority and have the opportunity to witness their festivals such as a wedding ceremony, buffalo stabbing festival, gong festival, and more.

From a distance, you can see the nine-story relic tower and statues of Amida Buddha weighing 40 tons and 7.5 meters tall. The presbytery is 16 meters high, and made of Hinoki (Po Mu) wood. This makes for a truly stunning building. The main wood doors have six elegant Bodhisattva carvings.

There is even a peaceful garden. Decorated with miniature landscapes, lakes, green trees, this area adds harmony and freshness to the pagoda’s solemn atmosphere.

Located in the center of Pleiku city, you can get to Pleiku prison by car, motorcycle or on foot. In 1925, the French built Pleiku prison to detain criminals, mostly ethnic minorities. By 1940, the revolutionary movement of the ethnic people developed strongly. At that time, the French colonialists used this place to detain patriots. During the Resistance War against America, the Americans continued using Pleiku Prison to detain political prisoners.

Pleiku prison consists of a series of permanent detention houses located in a large campus, surrounded by tall walls with watchtowers policed by armed soldiers. After 1975, the local government kept the prison as a place of historical education for younger generations.

However, the exhibition rooms are closed now and nobody takes care of the prison nowadays. Therefore, there is not much to see but can still pass by with knowledge of its history.

Ham Rong mountain is located on Highway 14B, gateway to the city and 11 kilometers south of Pleiku city center. People also call it Chu Ho Dong or Hon Rong mountain.

Ham Rong mountain is a volcano that erupted millions of years ago and is also considered the roof of Pleiku due to its height of 1,028 meters. It is a precious geological heritage of the province, but the scenery is still very wild and not exploited. From a distance, the mountain has many different shapes. Sometimes it looks like a trapezoid but other times it forms a half circle. If viewed from above, the mountain looks like a huge funnel!

You can only hike halfway up this mountain, the army will not let you go any further. You should still be able to enjoy panoramic views of the city, coffee, rubber, tea, and pepper gardens spreading over the hills. The side of the road to the top of the mountain is very beautiful with the yellow color of wildflowers.

Located ten kilometers away to the north of Pleiku, Sea Lake of Tea is located in Chu Pah district, Gia Lai province. This area is called Sea Lake of Tea because it is a combination of 228 hectares of freshwater lake and 1,000 hectares of tea hills. The French grew tea in this area around 1919.

To go to the hills, you will take the highway with the majestic mountains along the way. There is a small road taking you deep into the tea hills and the two sides of the road are full of pine leaves. In the harvest season, you can see local people scattered throughout the hills to pick tea leaves.

With the stunning and beautiful places above, Gia Lai is surely an attractive travel destination for you. Keep reading other articles about Gia Lai and the Central Highlands to understand more about this area.

Where to Stay in Pleiku, An Unspoiled Destination in The Central Highlands

If you enjoyed reading this article and would like some more fun info about what to see, do, and eat (and a bunch of interesting cafes!) in Vietnam, follow us at The Christina’s Blog!